UPDATE: There were a lot of great ideas submitted, but the two winners with the best ideas for using ferrofluid are Alexander Welk for his lava lamp concept and Kerec Tunca for the home decorating idea of ferrofluid sculptures adorning the walls (held by magnets). Congratulations!

For this week's Giveaway Tuesday, we're skipping the challenge and just giving the prize away! Well, you still have to do something to win, and that's racking your brain to come up with the cleverest use for the winning trophy—a bottle of homogeneous magnetic fluid (aka ferrofluid).

And just like last week, we will be choosing two winners.

It's called ferrofluid, but most know it simply as magnetic fluid—a thick, black-brown liquid that instantly responds to a magnetic field. Two winners will receive a one-ounce bottle of this colloidal magnetic fluid from Inventables. Unlike most magnetic fluids, this is not just iron filings, but a liquid made of magnetite that's actually homogeneous, meaning it's smoooooooth.

To make this ferrofluid, magnetite is ground into small particles and suspended in oil. The particles in the liquid must be just the right size (roughly ten nanometers). If the particles are too large they clump together like a fine magnetic powder. The particles must be small enough so they're not very different from the molecules of the fluid, but not so small that they lose their ability to become fully magnetic when placed in a magnetic field. 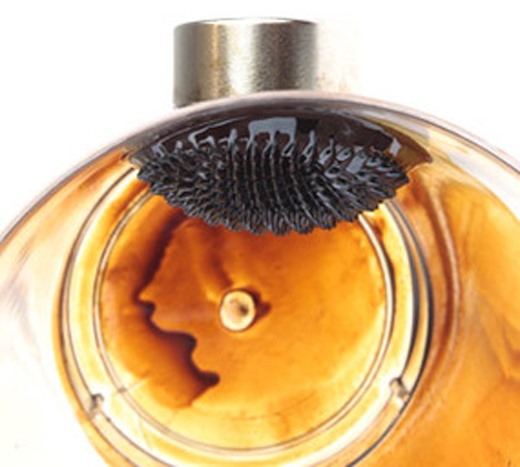 You can use this magnetic fluid for things like... well... that's what you have to tell us!

HERE'S WHAT YOU DO

All entries must be in by Monday, August 1st, 11:59pm PST. Standard rules apply. Post any questions below.

i very love to have this am a serious magnet lover

Seeing as how the FerroFluid is oil based, you could actually make a very interesting lava-lamp using the same principles as a speaker. Suspend the FerroFluid in water (thin, depending on how strong the magnet is) and run wires to a magnet. Suspending the FerroFluid in water will keep the magnetite from homogenizing with the suspending liquid but will create interesting bubble effects much like a lava lamp. An alternating current output from any audio device will push and pull the permanent magnet. The magnet will then interact with the suspended FerroFluid and dance inside the 'lava lamp'. Depending on how the FerroFluid reflects light (or doesn't) LED's could be introduced to add a color light show to the dancing liquid.

I would mess with people by putting the liquid on one side of the wall, and a person moving a magnet on the other side. I would also install small rare earth magnets all over a room, and put small amounts of the liquid on the magnets. it would make that cool star shape shown in the video. You could also possibly color the liquid with food coloring, which would make a little variety.

as this is magnets it would like all other metals be great conducters of electricity, by using this type of liquid ferrofluid to create electronical equipment and with other magnets such as neocubes create a circuit for a remote control vehicle, the magnet would help to stabalise everything and as it is liquid it can be used with no difficulty. It would be great to also create emulsions with the oil based magnet, this with heat can cause great effects and by changing the wave frequency on the type of wave such as radio to infrared can cause the magnet to respond with the waves and show different fabulous colourful reactions and with the magnet within other liquids can create perfect precipitates

I would make a puzzle maze to be solved using a metal tipped stylus.
Of course my maze would have pitfalls and things to avoid.

using a white plastic plate, i would create a display of some sort. electromagnets on the back when turned on would manipulate the ferrofluid creating different shapes. an 8-bit display could be achieved quite easily.

I don't think your cat would like that very much :)

i'd use it to make art

If you obtained a strong enough magnet (that can be turned on and off) and a large amount of ferrofluid perhaps you could create some sort of generator. Simply place the magnet in a higher position than the ferrofluid, turn it on to draw the fluid to the top, and then turn the magnet off to release the fluid and turn a wheel or something to generate electricity.

Mix it with a cleaner or solvent and use it to clean hard to access parts such a jets on a carburetors or sealed machinery compartments. You can use a magnet to force the liquid to a locate of through an area with out access the area directly.

Variable stiffness automobile shocks, the stronger the magnetic force the more fluid in the unit cause the shock to be stiffer. If the viscosity of the fluid changes when magnetic force is applied then the fluid amount would be static no needing a reservoir.

I would put it in a clear tube around the barrel of my coil gun so I can tell when it is active.

it would be cool if you had magnet placed in exactly the right position and put the ferrofluid in the middle of them and it formed a sculpture or bust that you could change with a different magnet array.

It could be used for the wheels of a small racing car, if the magnet was strong enough, it could pull all of the magnetite in and only leave the oil behind. With this in mind, we can use plastic supports on the edge and then have the magnet suspended in mid air. When you put the ferrofluid onto it, it would create wheels and if the magnet was shaped like a disk, then it could rotate and the magnetite would also rotate. the oil left behind can be lit on fire. Imagine it! a runaway ferrofluid car with black spiky, and spherical wheels leaving behind a trail of fire. After all of the oil is gone, you can just take off the magnetite from the magnet, and add more oil.

is it really necessary to make all the comments that are not yours as spam, honestly its not going to help your chances out

I'd take a glass bottle with 2 flat sides or a thinner shape than a complete cylinder and fill it with water and add the fluid to make an EM field detector. To make it easier to detect the fields I would add more oil to the fluid to make it disperse and lighten the weight.

Idea 2. Use it to generate electricity
^^^^^^^^^^^^^^^^^^^^^^^^^^^^^^^^^^^^^^
After a little bit of research about ferrofluid I have come to know that it is either water based or oil based. In either case, it helps reduce friction. So my setup is not an invention but just an idea to generate electricity with minimum amount of friction.
Steps:
- Take a long glass beaker and pour some ferrofluid in it.
- Insert a magnet in it.
- Coil thin copper wire around the beaker say about 500 turns
- Surround this entire setup with magnets at a safe distance such that they dont really touch the beaker or coil
- Connect the two ends of the coil to a LED (just for experiment sake)
- Now to begin with just give a little motion to the magnet placed in the beaker such that it starts rotating along is own axis inside the beaker.
- The ferrofluid will help the magnet to rotate longer due to less friction, and this should produce electricity and the LED should glow due to current induced in the coil by magnetic flux.

Idea 3. Use it to make piston
^^^^^^^^^^^^^^^^^^^^^^^^^^^^^
Since ferrofluid gets attracted to magnet, we could probably use both to get a piston mechanism.
If a hollow piston is made of thin aluminium or any other metal other than iron, and filled up with ferrofluid and its up and down motion is controlled with the help of a powerful magnet then we could have a mechanism of piston which can be used in many different ways.

The advantage of this would be light weight, cost effective.

Idea 4. Use it to make move objects
^^^^^^^^^^^^^^^^^^^^^^^^^^^^^^^^^^^^
If thin flexible hollow tubes are filled with ferrofluid and series of magnets are arranged above the tube at a distance such that they never come in contact with the tube and are used in such a way that creates a wavy pattern then we may be able to get the flexible tube moving in a forward or backward direction.
If you are not able to imagine what I am trying to say, then you may just imagine it to be a catepillar. If you may have observed a catepillar crawl, you might have noticed that it has a flexible body and it moves ahead in a wavy pattern, lifting its tailend first and then the middle part and then the frontend of its body thereby creating a wavy shape.

All interesting ideas Vivek, but you're only allowed to post once for this contest :(

i would put it in saran rap or something similar and use it to get something magnetic that fell in a crack.

i have a huge collection of magnets from different kinds,i love powerful magnets,iam collect used hard disks to get magnets from them,.collecting magnets is a one of my hobby..i very love to see this super magnetic fluid in my working table plz give me that bro...please please everybody rate me to get this again please help me bro & sis tnx